Robyn Tingley is a speaker, author and award-winning communications strategist who helps executive leaders engage their employees to drive higher performance. She has lived and worked around the world as a corporate HR and Communications executive for a Fortune 100 company with responsibilities spanning four continents.

While building a global corporate career, Robyn launched three social enterprises before the age of 40, including GlassSKY Inc., which was launched in 2015 and born out of a passion to support female economic empowerment and next-generation leaders. Since then, GlassSKY has grown into a company that serves blue chip clients and government with a range of management consulting services, including strategic communications, creative design, research, and inclusion and diversity programs.

She is the vice-chair of the Board of Governors of the University of New Brunswick, Honorary Lieutenant Colonel of the Canadian Armed Forces’ 37 Service Battalion, and a founding member of Women for 50%, an initiative focused on greater female representation in politics. Her new book, 10 Essentials for the Motivated Millennial, and her career advice have received praise from global senior executives and are featured in Dow Jones, Oxford Business News, Fast Company, CBS, Monster.com, The Future of Everything and more.

Robyn was named to the Women Worth Watching list of top female executive trailblazers in Europe and North America, and was selected as one of the 20 Most Powerful & Influential Women in California. In November 2017, she was named by WXN as one of Canada’s Top 100 Most Powerful Women for her work in supporting women in the workforce. In 2019 she was invested in the Order of New Brunswick, the province’s highest civilian honour, for her corporate and community leadership, as well as her work to support gender equality.

She is an award-winning communications strategist, a GPHR, SCP in HR, and a practitioner with the Canadian Centre for Diversity & Inclusion. She holds a degree in psychology from St. Francis Xavier University and a degree in journalism from the University of King’s College. She has studied executive education at McGill, Paul Merage School of Business at University of California Irvine, as well Oxford University’s Said Business School where she was selected as one of 30 women worldwide to pilot their Inaugural Women Transforming Leadership Program. In 2019 she completed a post-graduate certification with distinction from King’s College London School of International Relations and National Security Studies. 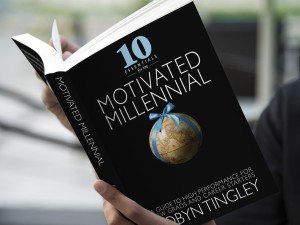 Robyn speaks to ACT ONE about embracing Millennials